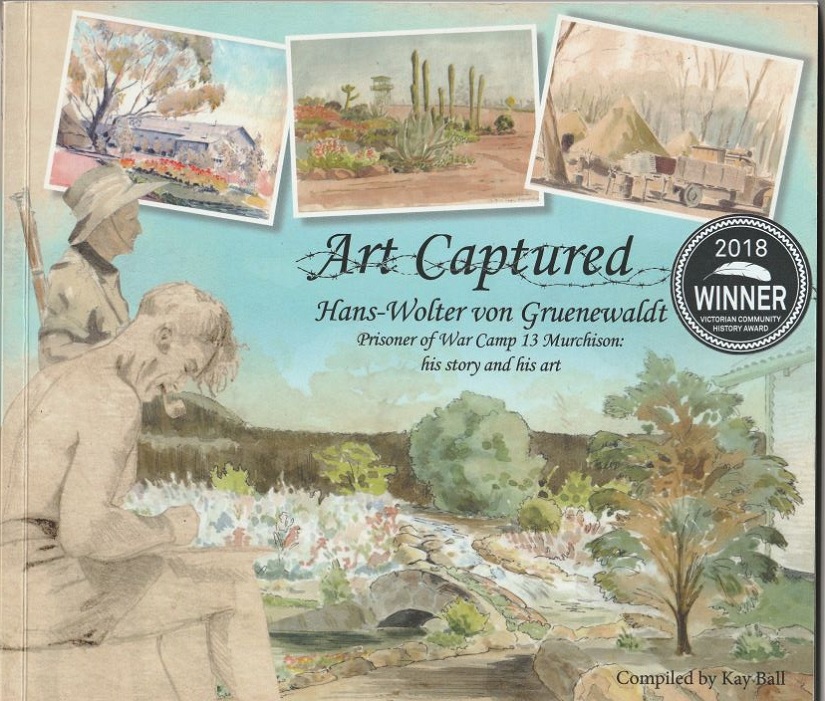 Art Captured by Kay Ball tells the story of Hans-Wolter von Gruenewaldt, a German nationalist, engineer and amateur artist.  Transported to Australia on the HMT Dunera in 1940, alongside the 2000 or so civilian internees now known as the Dunera boys, von Gruenewaldt was incarcerated for more than six years at different camps in the Goulburn Valley.  He was classified as a prisoner-of-war, though he hadn’t worn German uniform in the war: he was captured in November 1939 en route from South Africa to Germany.  During his incarceration in the Goulburn Valley he produced a remarkable visual record of life in captivity.  This book reproduces a selection of his works, now with the Murchison Historical Society, in vivid and compelling detail.

Gruenewaldt was neither a Dunera boy nor a Queen Mary internee.  But he did know something of their experiences, having been transported to Australia and incarcerated in the Goulburn Valley.  This book offers a glimpse of a wider history – that of the Second World War POW and internment camps in the Goulburn Valley – and so helps us better to understand Dunera and Queen Mary stories.

Art Captured: Hans-Wolter von Gruenewaldt, Prisoner of War Camp 13 Murchison, His Story and his Art, won a 2018 Victorian Community History Award.  The book is available through the Murchison Historical Society at a cost of $25.

Contact: This email address is being protected from spambots. You need JavaScript enabled to view it.