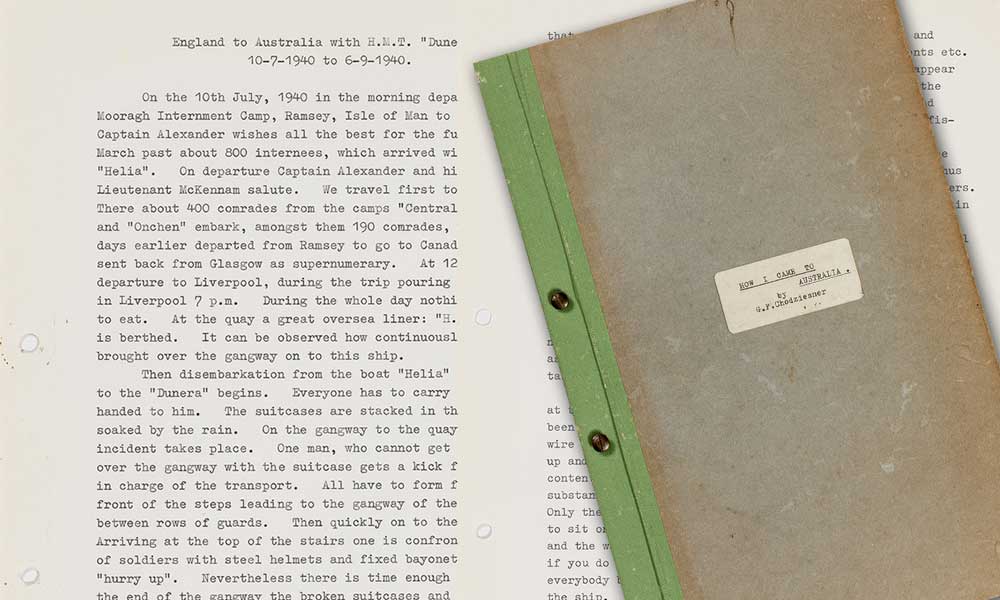 Georg F. W. Chodziesner was born into a Jewish family in Berlin on 4 March 1900.  In 1939 he managed to escape Germany for Britain, and in 1940 was deported to Australia on the Dunera. In 1941 his wife Dorothea and their six-year-old son Ben escaped Germany for Chile. Dorothea died in 1943, with father and son only reunited in 1945.

Georg came from a remarkable German literary family. His sister Gertrud, known by her pen name Gertrud Kolmar, won fame as a poet. The philosopher Walter Benjamin was their first cousin. Georg made his own telling contribution to literature, albeit less well known. Soon after the war he wrote a detailed and damning account of the mistreatment of the Dunera internees during their voyage to Australia in 1940. This record of the voyage, told coolly and dispassionately, is probably the most important and comprehensive account available to historians. It is especially valuable because Georg wrote from the perspective of a witness, his purpose to provide a record for posterity rather than to capture his own experiences. For the first time we are making his remarkable account of the voyage publicly available.  We thank his grandchildren for this permission: Paul Chodziesner, Simon Chodziesner and Thea Chodziesner.

In 2020 Joshua Chodziesner turned to the Dunera diary of Georg Chodziesner, his great grandfather, to illustrate the moment when torpedoes were fired at the Dunera. This incident looms large in Dunera memory, and its telling is increasingly clouded by myth. Here Joshua uses a primary source - Georg's words and thoughts - to capture the incident. One influence on Joshua's style is the graphic novel Maus by Art Spiegelman. We are delighted to share Joshua's work on the Dunera Stories website.