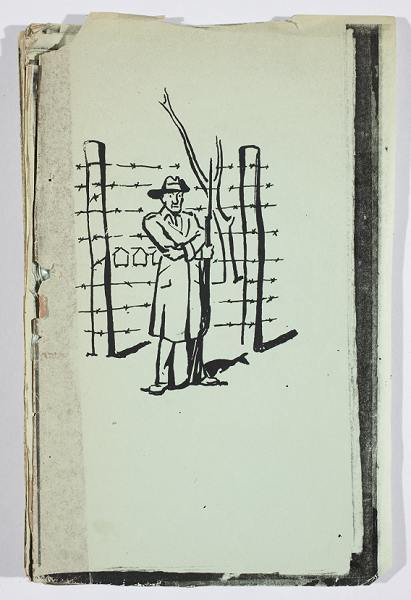 Though many Dunera boys set pen to paper to record their memories, there are few whose writing has come to be so synonymous with the Dunera experience as that of the poet Oswald Volkmann. His poems appear in many publications about Dunera, and are still shared in newsletters. Many Dunera boys owned Volkmann's slim book of poetry, Under Consideration or Im Stachelkreis. A fully digitised copy of each has been preserved at the Jewish Museum of Australia in Melbourne. 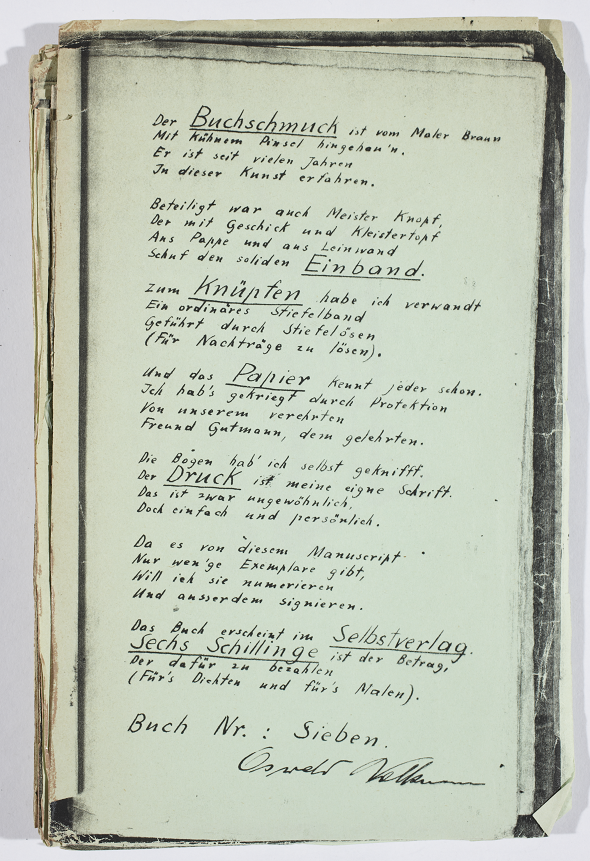 The ‘Dedication’ Poem that appears at the beginning of Im Stachelkreis. In German, it details the various individuals who helped Volkmann put the book together.

Under Consideration is very much a product of Volkmann's experiences and of the time it was written. Bern Brent, in an article for Federkiel, the online publication from Das Zentrum (the Canberra-based Australian-German cultural institute) writes that he bought the 'small typewritten volume' for 10 shillings during internment. The booklet contains a number of poems written in English and in German, but not both at once. These were poems not intended for translation; rather they were written for a bilingual audience: his fellow internees. Volkmann oscillates between the two languages, harnessing the advantages of one or the other to tell his story.

At once playful, insightful and sometimes melancholic, the poems range from humorous perspectives on the mundane day-to-day activities of the camp to questions of loyalty and belonging. In Gravel Party Volkmann details the only opportunity the internees had to spend time outside the confines of the camp: if they '[volunteered] for gravel'. It's an otherwise dull-sounding task that Volkmann, through his buoyant use of language, transforms into what might almost be a peppy adventure, until the final two lines of each stanza bring it squarely back down to earth:

And off we go the open road


At fifty miles. How pleasant!
we see the cattle, sheep and pigs,
We never see a peasant.
Our only chance to travel
Is fetching sand and gravel.

We throw the gravel on the truck
"Our speed is most amazing"
And then we ask the sergeant what
He thinks about some bathing
Our only chance to travel
Is fetching sand and gravel.

By contrast, Loyalty digs deep, tackling the helplessness felt by many internees, that the men had simply been forgotten about, abandoned. The final stanza reads:

And here we are, without the means
Of proving our case
Behind a strongly guarded fence
In a forgotten place.
We wait while the authorities
Consider the release
Because we are His Majesty's
Most loyal internees.

Volkmann's poetry shaped the camp lexicon. The phrase 'His Majesty's most loyal internees', repeated throughout the poem, was widely quoted in camp. Similar sentiments of displacement and uncertain identity are reflected, in German, in Wer sind wir? (Who are we?):

We're not POWs
Though we're under lock and key
And though we sure aren't Nazis
They're suspicious as can be.

The poem closes with the lines:

The answer to the title is:
We are – the deceived

Volkmann's often whimsical sounding rhymes belie what is, in many ways, poetry of frustration and protest:

Inside of Tatura's school
Law is studied, as a rule
But one part no one highlights
Is our own lack of human rights.

In spite of the popularity of his poetry among his fellow internees, during the war and after, Volkmann remains an enigmatic figure. Born in Liegnitz, Germany, on 7 August 1899, Volkmann was in his mid-forties by the time he arrived in Australia. Little else is known about Volkmann's life before deportation.

He served as a fighter pilot during the First World War, and is said to have flown with the legendary Manfred von Richthofen, widely known to the English-speaking world as the Red Baron. This is possible: in 1914 there were only about 500 pilots in Germany's Luftstreitkräfte.

In 1928, he married Hettie Luise Schwarzwald, his second wife. From 1938 and possibly earlier, they lived in Britain, where he worked for a Swiss company, Schacker Ltd. When the police came to arrest him in Birmingham in 1940, Hettie held her ground and demanded she be interned alongside her husband. Despite the police officers' insistence that they had no orders to take her into custody, she was adamant, and they took her as well. 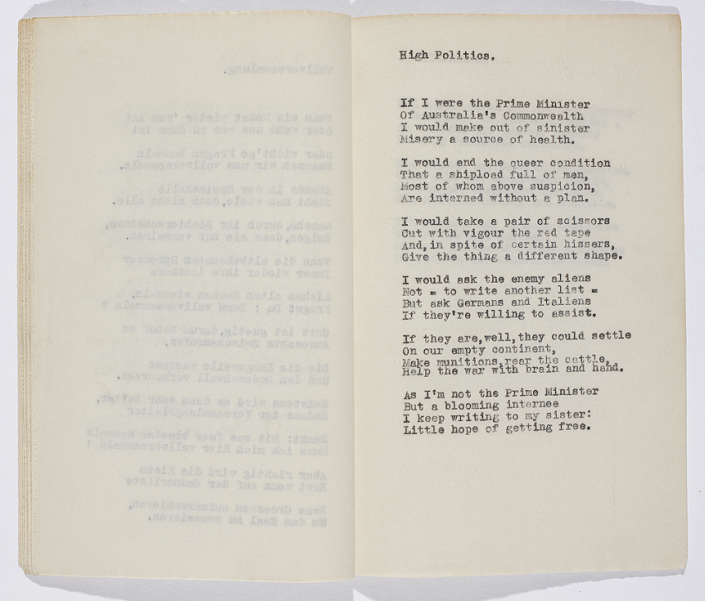 Bern Brent, who was Volkmann's neighbour in Camp 3 for nine months, remembers some of what Volkmann shared with him. 'When war broke out', Bern writes, '[Volkmann] did not return to Germany and declared himself to be an opponent of the German regime'. Volkmann was assured by the officer in charge of the camp in which he and Hettie were interned in Britain, that she would follow him wherever he was sent. Many married internees received such promises; the promises weren’t kept. Volkmann was deported to Australia, Hettie remained behind.

Volkmann left Australia to return to Britain in November 1941, which he had been attempting to do since he first reached Australia in September 1940.

On his return to Britain in February 1942, Volkmann again was interned before finally being released on 13 January 1943, when he returned to his former residence in Edgbaston, Birmingham. 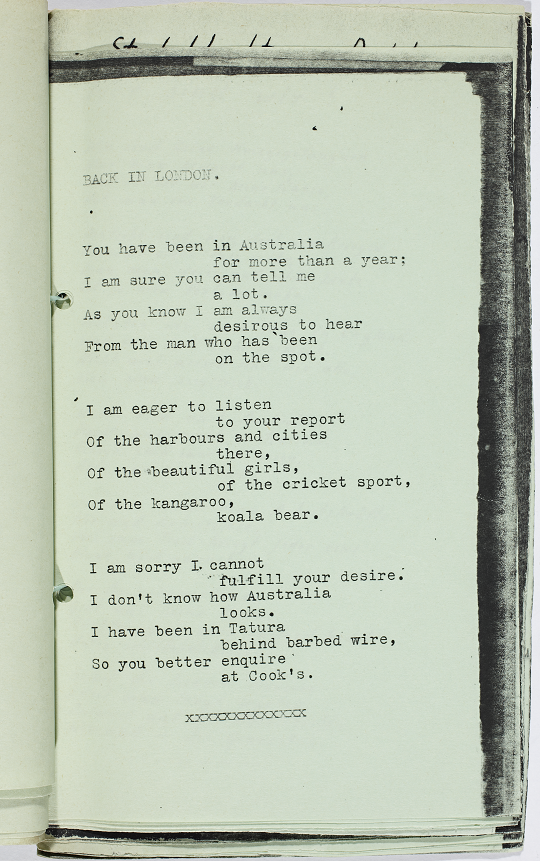 Hettie Schwarzwald died early in 1956. The following year Volkmann married Cecilia Dent, his third wife. She died on 14 February 1974. It is unclear whether they were still married at this time, though a 1975 phone book entry suggests they were: he was living at the address where she had died. Had Volkmann died in Britain there would likely be a record, but no such evidence has been found. His name is also not on the list of attendees at a Dunera gathering held in Britain in 1987.

Though they lost touch after Volkmann left Australia, Bern Brent 'heard decades later [that Volkmann] had returned to England during the war, and had eventually become the mayor of a small town in Germany'. But like so much else, this is unconfirmed. 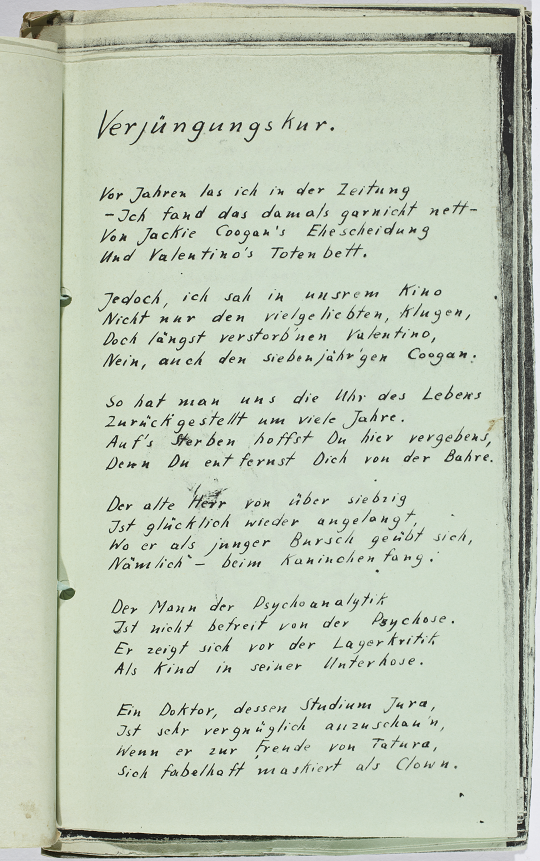 ‘Verjungungskur’ (English: 'Fountain of Youth') in Im Stachelkreis. It describes the strange nature of time in the camps. Oswald Volkmann, author, 1941, Australia © Estate of Oswald Volkmann 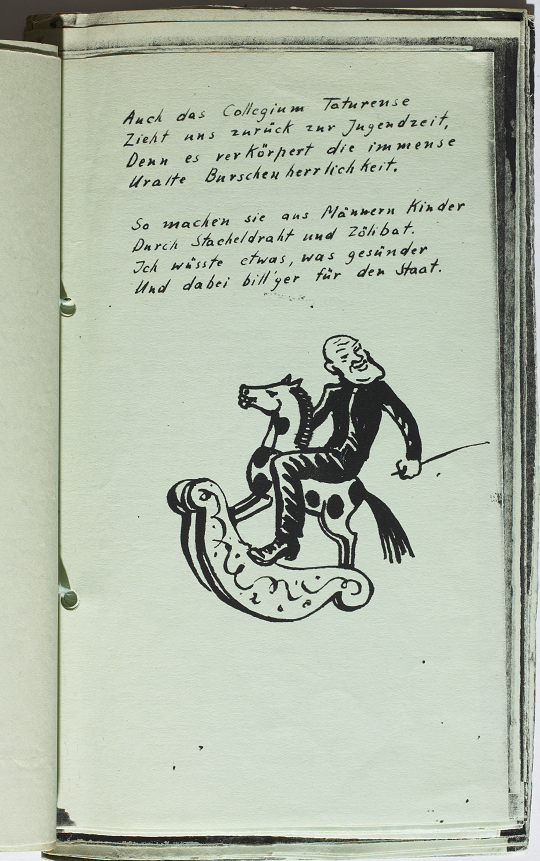 The penultimate stanza reads: 'And the Taturans, it's the truth/They draw us back to our childhood./For they embody sense of youth/Perhaps far better than they should'.

These few biographical details form the outline of a life, but little more than that. Interestingly, Volkmann did not write poetry before internment. As he told Bern, it wasn't until his time behind barbed wire that 'he discovered his talent for poetry'. He also seems not to have written poetry after internment. While he may have continued to write privately, it does not appear that he ever pursued a career as a poet or published poetry after his release. The man whose poetry captured the minds of Dunera internees, and the spirit of their experiences, seems to have vanished, like so many others, into post-war Europe.

Should you have any memories of or information about Oswald Volkmann, please get in touch. We would love to be able to add to this story.

Thank you to Carol Bunyan and Bern Brent for their assistance with biographical details.


All images © Estate of Oswald Volkmann